This thesis deals with the development of an integrated three dimensional sound intensity probe. Although a 3D sound-intensity probe based on an (manual) assembly of multiple particle velocity sensors and a sound pressure microphone exists, by integrating all sensors into one chip the size can be reduced further. A small sensor size is preferable, because it enables the user to do measurements on small objects, very close to objects and with a minimum disturbance of the sound field.

An investigation on various types of particle velocity sensors with respect to sensitivity and self-noise is done. The results give insight in the optimum sensor configuration as well as how much a different design affects the signal quality of the sensor. When designing a 3D sensor geometry this is useful. Following the design of a three dimensional particle velocity is discussed. Based on experiments with a manually assembled 3D-particle velocity probe, a chip with four integrated particle velocity sensors is developed. The device is fully functional and used in experiments described in the second to last chapter. Experiments with this sensor show that the expected direction of sensitivity did not match the observed direction very well and that objects in the direct vicinity were responsible for this behavior. It is investigated what the origin of the deviation is. The deviation can be compensated for, either in signal processing or an adapted design.

A two-dimensional particle velocity sensor with four sensor wires is invented. Compared with similar two-dimensional two-wire designs the sensor exhibits a better self-noise together with a smaller size. Combining two of these 2D sensors with a sound pressure sensor in one chip results in a smaller 3D sound intensity sensor with a better self-noise. The size of this sensor is 2 mm wide and 1.3 mm thick. The length of the bare element is 1.5 cm.

Fabrication of the sensor elements is done in a clean room environment. The fabrication process is done on both sides of the wafer, resulting in fragile sensor wires on both sides of the wafer. Instead of dicing the chips from the wafer, a 'break out' design proves to be a good solution to separate the chips from the wafer. Assembly of the fragile sensors to a useful element requires a carrier board. The assembly of the sensor element to the carrier board normally done with glue and wire bonding is a time consuming process. The use of a small connector with a sensor design specially adapted to this connector proves to be of great use. With the connector the sensor elements can easily be mounted and replaced if necessary.

The integrated 3D sensor can be used to measure the sound field near (small) sound sources, as described in the second to last chapter. In an experiment demonstrating this it is also demonstrated that measuring particle velocity near a sound source has advantages compared to measuring the sound pressure.

In conclusion, a very small 3D sound-intensity probe has been developed, tested and proved useful. Application of the sensor in a commercial product has become feasible with a fast and reliable assembly method. 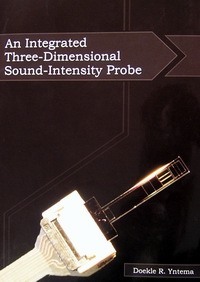